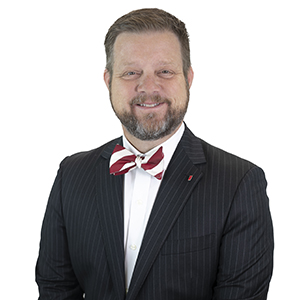 Cook spent the previous 22 years at Texas Tech University, including the last 11 in university administration as the institution’s Senior Director of Communications & Marketing. His duties included serving as university spokesperson, crisis communication coordinator and guiding messaging and marketing efforts on behalf of the institution, in addition to leading an office that provided communications, marketing, social media, video, photography and web and graphic design support to the campus community. Cook also delivered direct communications counsel to university leadership and departments throughout campus.

From 1999-10, Cook directed the university’s athletics communications office as Associate Athletics Director, helping lead the department’s media efforts through one of the most successful periods in the university’s history. The Red Raider football program, directed by then-head coach Mike Leach, and the men’s basketball program, led by hall of fame coach Bob Knight, along with other successful sport programs, elevated the department’s profile and subsequent national and international media attention.

In 2008, Cook led an award-winning Heisman campaign on behalf of All-America wide receiver Michael Crabtree and quarterback Graham Harrell, which resulted in unprecedented off-the-field coverage for the football program. The Pass or Catch 2008 campaign, which was a play on the U.S. Presidential campaign that same year, received nationwide attention throughout the season. The effort was recognized with a national Telly Award in 2009. The 2002 Heisman campaign for quarterback Kliff Kingsbury won an award from the Press Club of Dallas.

Prior to joining Texas Tech, he served as Assistant Sports Information Director at Saint Louis University from 1994-99 and was a graduate intern at Western Kentucky University from 1993-94. Cook is a 1993 journalism graduate of Louisiana Tech University and received a master’s degree in mass communication at Texas Tech in 2012.

Cook, a devout Parrothead since 1989, and his wife, Jennifer, have a teenage son, Jack, and two dogs, Arrow and Hutch.