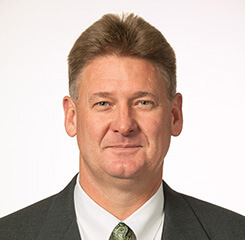 Wayne is the Sweetwater area manager for First Financial Trust, where he is responsible for business development and trust, estate and retirement plan administration.

Wayne joined First Financial Trust in 2011 and brought with him a wealth of experience and knowledge of the market and community, having lived in Sweetwater since 1989.

Previously, Wayne worked for AIG VALIC for 11 years as a financial advisor where he specialized in Higher Ed, K-12 & Governmental Groups.

Wayne is active in the community as a Board member of Nolan County Coliseum and Sweetwater Country Club as Board member and President. He served as a Trustee on the board of directors for the Rolling Plains Memorial Hospital for 8 years. He also served on the boards of the Sweetwater Chamber of Commerce and Sweetwater Jaycees, and was chairman of the World’s Largest Rattlesnake Round-Up. Wayne served on the Administrative Council TBA Wealth Management and Trust Board. He is a graduate of the TBA Trust School in 2012 and completed the Graduate Trust School at Southern Methodist University in 2013.