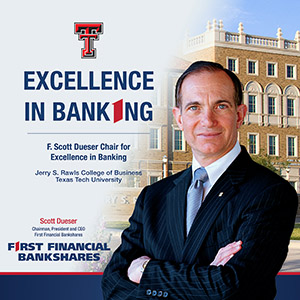 In September, the donors endorsed naming the endowment in Dueser’s honor because of his dedication and vision to raising financial support for the Excellence in Banking program. This program will ensure Texas Tech teaches best practices and West Texas community values to the next generation of bankers. Dueser’s tireless efforts helped the program surpass its goal, raising more than $11 million in just nine months.

“The Rawls College is honored that F. Scott Dueser’s name is now permanently associated with the college and the Excellence in Banking program,” said Margaret L. Williams, dean of the Rawls College of Business. “Scott pushed us to establish this program to provide a robust pipeline of talent to the banking industry, and he has put all of his support behind it. Working together, we expect this to become the premier banking program in the country; we know Scott will settle for nothing less.”

Dueser serves as chairman, president and CEO of First Financial Bankshares Inc. He received his bachelor’s degree in finance and accounting from Texas Tech in 1975, then graduated from the Southwestern Graduate School of Banking at Southern Methodist University in 1981. Dueser was named a Distinguished Alumnus by the Rawls College of Business in 2006 and the Texas Tech Alumni Association in 2019.