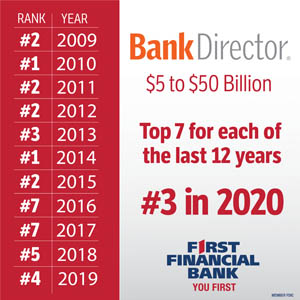 "We certainly are pleased to be named as one of the top banks in the nation again this year," said F. Scott Dueser, Chairman, President and Chief Executive Officer. "This accomplishment is due to the direction of our Board, the support of our shareholders, the dedication of our employees and the loyalty of our customers who have kept us Texas Strong for more than 130 years. Even in unprecedented times, we remain steadfast in our commitment to meet the challenges of today while continuing to grow and provide excellence in customer service. We accept this honor with great humility and are extremely gratified to have been the only bank rated between number seven and number one in the nation for the last 12 consecutive years."

For its list of the top-performing publicly traded banks, Bank Director Magazine looked at profitability measures including return on average assets and return on average equity; strength of capital in the tangible common equity to tangible asset ratio; and asset quality measures including the ratio of nonperforming assets to total loans and other real estate owned, and net charge-offs to average loan ratio.

The entire story and full ranking from Bank Director Magazine are available on their website at www.bankdirector.com.

The Company is listed on The NASDAQ Global Select Market under the trading symbol FFIN. For more information about First Financial, please visit our website at http://www.ffin.com.

Certain statements contained herein may be considered "forward-looking statements" as defined in the Private Securities Litigation Reform Act of 1995. These statements are based upon the belief of the Company's management, as well as assumptions made beyond information currently available to the Company's management, and may be, but not necessarily are, identified by such words as "expect", "plan", "anticipate", "target", "forecast" and "goal". Because such "forward-looking statements" are subject to risks and uncertainties, actual results may differ materially from those expressed or implied by such forward-looking statements. Factors that could cause actual results to differ materially from the Company's expectations include competition from other financial institutions and financial holding companies; the effects of and changes in trade, monetary and fiscal policies and laws, including interest rate policies of the Federal Reserve Board; changes in the demand for loans; fluctuations in value of collateral and loan reserves; inflation, interest rate, market and monetary fluctuations; changes in consumer spending, borrowing and savings habits; and acquisitions and integration of acquired businesses, and similar variables. Other key risks are described in the Company's reports filed with the Securities and Exchange Commission, which may be obtained under "Investor Relations-Documents/Filings" on the Company's Web site or by writing or calling the Company at 325.627.7155. Except as otherwise stated in this news announcement, the Company does not undertake any obligation to update publicly or revise any forward-looking statements because of new information, future events or otherwise.