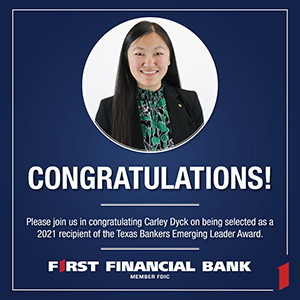 FORT WORTH, Texas, June 10, 2021 - First Financial Bank, N.A., announced that Carley Dyck, Senior Vice President and Chief Operations Officer for the Fort Worth, Hereford, and Southlake bank regions, has been selected as 2021 Emerging Leader in Banking by the Texas Bankers Association and will be honored at their annual convention in August. The announcement was made by Ron Butler, Executive Vice President and Chief Administrative Officer, First Financial Bankshares, Inc.

"Carley is an outstanding young officer in our Company and we are so pleased that she is being recognized for her contributions to our Company, the greater Dallas/Fort Worth community and to the banking industry," Butler noted.

Dyck began with First Financial in 2005 as a teller and was quickly promoted to loan operations. In 2008, she became an operations officer and was promoted to Vice President of Operations in 2015. Dyck received a bachelor of business administration degree from The University of Texas at Arlington. She has been recognized as a First Financial Bank Shining Star and for her participation in the FFIN University Leadership Development Program.

The Emerging Leader Award was created by the Texas Bankers Foundation in partnership with the Texas Bankers Association Bank Leadership Council to honor bankers who have had a positive impact in the banking industry and are leaders in their bank. To be honored, bankers must have five years of experience in banking, be an employee of a TBA-member banking institution and be nominated by the bank president, CEO or board chairman.