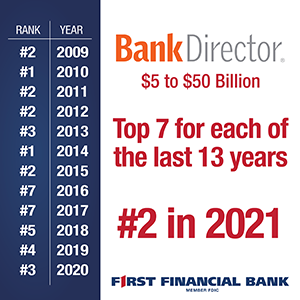 ABILENE, Texas, August 4th, 2021 – First Financial Bankshares, Inc. (NASDAQ: FFIN) was recently named the No. 2 top-performing publicly traded bank in the nation in the $5-$50 billion asset category by Bank Director Magazine. The designation marks the 13th-consecutive year the bank has been listed among the top seven performers nationally and the seventh time at No. 2 or higher.

“This rating does not come easy but with much teamwork, strategic planning, expertise, and a lot of hard work,” said F. Scott Dueser, Chairman, President and CEO of First Financial Bankshares. “This award is attributed to every employee, officer, board member, and advisory board member whose dedication and commitment to this company make us what we are today. This recognition also reflects the loyalty of our customers whose trust in us make First Financial a national industry leader.”

Bank Director Magazine comprised its list based on profitability measures, including return on average assets and return on average equity; strength of capital in the tangible common equity to tangible asset ratio; and asset quality measures, including the ratio of nonperforming assets to total loans and other real estate owned, and net charge-offs to average loan ratio.